Check out this incredible video with a bulldozer police chase after a 18-Year old stole this massive thing and drove it around the streets. Police chased this teenager for nearly four miles before this teenager back over Police car completely destroying it. This chase could end up even more seriously if the officer didn’t runs out of the way of the Bulldozer just in time. 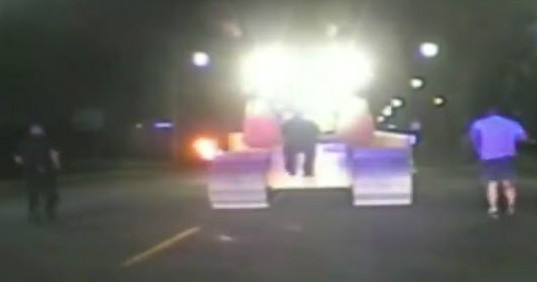 The driver put the life of these officers and all the citizens in danger and citizens with his ongoing destruction of public property and public endangerment. However, we should all be aware that Police officers can’t shoot out of Bulldozer’s tires because they are made of metal and also can not lay down spike strips in order to destroy it’s tires.

Maybe the employees who didn’t secure enough the Bulldozer are one of the reason this happen. Kudos to the Police Department from Kankakee, Illinois for doing their job properly and handling the things in a way they did without taking any lives in the process. It is very unfortunate for all the lives of police officers and all the victims that were taken unnecessary, but why spread more ignorance on social media about how they did their job… These guys are heroes.

BULLDOZER CHASE: Police in Kankakee engaged a bulldozer in a chase that lasted nearly four miles long after an 18-year-old stole a bulldozer and drove it around the streets. The footage shows the bulldozer backing over a squad car and completely crushing it, as an officer runs out of the way just in time.Full Story: http://bit.ly/2ydPs5JVideo Courtesy: City of Kankakee