Some guys really do not know when to stop and what to do in order to cross the boundaries of the ordinary and trivial, so they come up with all sorts of totally insane ideas, and the funny thing about it is that many times, these funny actually work! Believe or not. That is exactly what we have here in this video, two crazy guys, `modifying` the bike exhaust of their Kawasaki ZX6R, into a real monster pipe in order to produce the loudest possible sound they can! We think that even without watching the video below, you get the picture about what we`re talking. 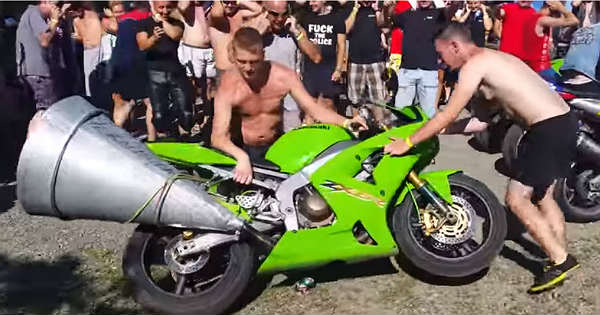 With a `horn` like that, the rider can be a thousand percent sure that he will be noticed and heard from miles, and miles away, if that is the case! We can only wonder if it is possible to make a bike exhaust system that is even bigger!

But the point here is just for pure fun (and maybe making a total idiot out of yourself) and giving the audience a show. Just watch the reaction of the crowd as the guys are hitting full throttle on that great ZX6R and spin it in circles. One heck of a machine, that never dies. At the very least, people seemed to enjoy the show! They might have covered their ears at the beginning, but at the end, they all cheered!

The appearance of the Kawasaki ZXR6 ninja might have been worsened a little bit, but putting the big bike exhaust system proved to be a good call! Many people enjoyed it, and at the end of the day, that is what matter most for some people. If you plan on watching this video while wearing headphones, we warn you to turn down the volume! With that being said, enjoy the show!

Finally, click here to find out what are the unwanted noises for your vehicle!