Another amazing barn find for one lucky guy! 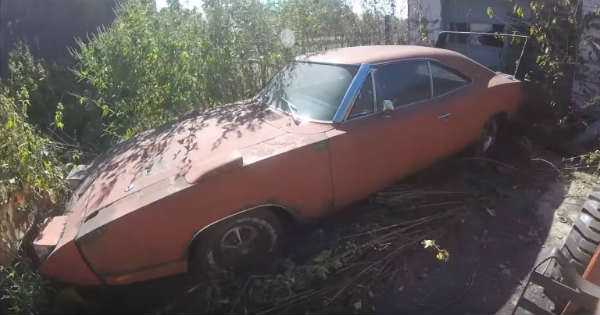 When it comes to barn finds, everything is possible. Cars which no one would expect to ever see in their life can pop out literary out of nowhere. In the following video we see just that, an utterly amazing barn find, the 1969 Dodge Charger Daytona. The story behind the car is interesting too. Namely, the owner refused to sell the car for many years and it was left rusting in the yard. After his death, the family decided to have the car repaired hence it is very rare. Only 503 such cars were built and it is a collector`s item for sure.

The guys from The Auto Archeologist film the car before they pick it up, it is surrounded with tall grass and they even have multiple pictures taken each year from 2011 to 2015. The interior is in poor condition but it seems as if nothing would stop them. In fact, this was the first car to ever reach 200 mph but they were banned from NASCAR in 1970. At auctions, they have been sold for millions of dollars. No one would like to see this amazing barn find rusting away. What do you think, is this the best find so far?