Somewhere in the Czech Republic, lies an abandoned Mercedes Benz SLR that could probably sell for a lot of money even now! The alluring car has been designed to perfection and it had probably been driven for a while and used for some sort of criminal activity, so the police confiscated it back in 2010. The second set of pictures was taken in February of 2017 and the car looks incredibly desolate, almost undrivable. 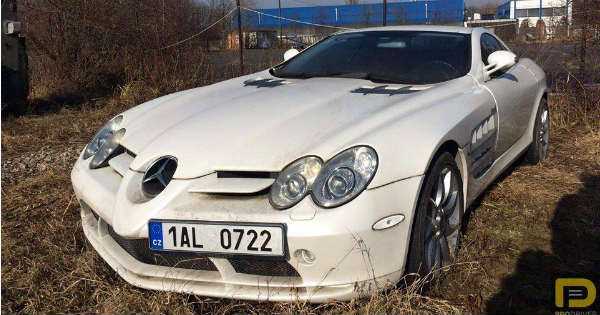 However, you`d be a fool to believe it – this machine can take a lot of abuse, even if it looks too pretty to be used after a long stint of doing nothing – a mechanic or two and a few hours of time and they`ll get it up and running in no time! Apparently, this abandoned Mercedes Benz SLR has company at the impound lot – it`s joined by a bunch of Porsche 911`s some X5s and X6s, as well as a bunch of Hummers and Audi`s that are just standing there rotting away slowly. The police doesn`t even allow for people to go and see these legendary cars, let alone photograph them, so how the guy that published these pictures actually got a hold of them is a mystery to me.

This abandoned Mercedes Benz SLR is now awaiting trial in the impound lot, and afterwards the court can decide whatever it wants when it comes to ownership. They might return it to its original owner or they might auction it off and make some money. Either way, we haven`t seen the last of this car!

Meanwhile, this Mercedes-Benz unveiled in Miami is a real eye-catcher!