Car manufacturers tend to see other brands as their personal rivals, and most often they try to build something that is way better than their rival. Such car manufacturing companies who are in a constant struggle to take over the throne are Ford vs. Chevy. Their names have been around for over hundred years and have marker the US history with some remarkable cars. What you are about to see in this video is exactly that, the rivalry goes on the highway and we see head to head duel between the 2015 5.0 Blown Ford Mustang Whipple Full Bolt Ons versus the 2017 Chevy Corvette C7 Z06 HCI Full Bolt Ons. 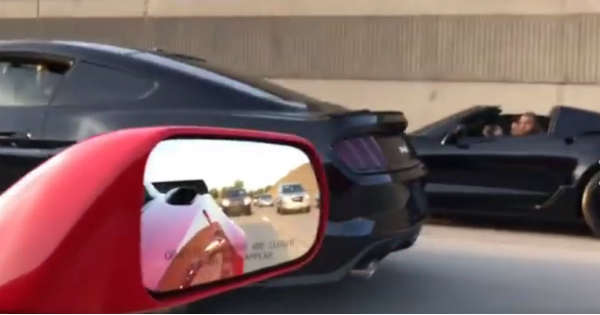 These very powerful cars go on a duel that everyone would love to see. They can be doing revs with their cars and preparing for the race! Once everything was set and the hand went down, both cars are seen rushing on the highway at a very high speed. Though most of you might assume that the Corvette would go in for an easy win, the Mustang had something else in mind.

The great tuning that has been done and upgraded transmission that the black Mustang Whipple had enabled him to easily win over the red Corvette. Though many argue that the Corvette was unchanged and had its stock condition, it still lost the race to its rival and it is something that we cannot overlook. What do you think about this battle of the Titans?