1958 Chevrolet Corvette is a long-existing model of vehicles and is rather famous in the sports car category. As time passes, new generations come stronger and powerful, while other go as their time has passed. But what if it hasn`t? What will happen if we take an old Corvette and adjust it to the new modern life needs? A group of experts has tried to do that and not with any kind of classic vehicle, but with the 1958 Chevrolet Corvette Roadster.

So, it took three years for this endeavor to be completed. And…the result is magnificent. The result is a Corvette modernized vehicle which is made of Corvette elements meaning that there are no elements originating from other auto brands. The Corvette has a Spectrum Turquoise color. The first generation featured an engine capable of producing power of 283 hp. The 1958 Chevrolet Corvette has replaced this engine with a new-fashioned Corvette LT1 Generation II 350 engine capable of developing power of 420 hp. The Corvette also features a 700 R4 automatic transmission with 4 speeds. If you want to own this princess you will have to set aside “humble” 119,900 dollars which is not that much having in mind that this vehicle is usually supposed to have price of about 200,000 bucks. 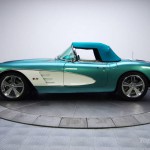 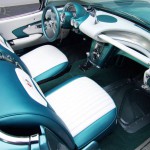 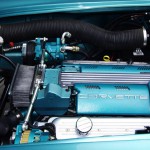 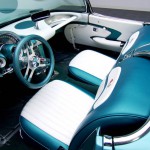 The owner of the car in the last fifty years remains unknown, but the team had to make an immense effort to revive the car for which it took three years. The team had to use sodium to get rid of the broken parts of the vehicle. Then they made a SR3 Motorsports frame for the vehicle colored in turquoise with the usual white details on the doors. The Corvette also features a top painted turquoise vinyl with a glass window which is characteristic for the 1958 model. The inside of the Corvette is also turquoise with white details on the dash. The interior has not been changed at all with exception of few minor alterations such as the bit smaller steering wheel and the Loker transmission shifter. The interior is covered with leather

As already mentioned the 1958 Chevrolet Corvette Roadster has a LT1 Generation II 350 engine featuring a 700 R4 automatic transmission with 4 speeds. The transmission has a cooling system. The engine has aluminum heads, electronic fuel injection and cast iron and it is connected with dual exhaust system. The engine is powerful enough to produce 420 hp.

Watch the Amazing Video from the 1958 Chevrolet Corvette Roadster!

Finally, you can buy some of the best oldtimer cars on this link!